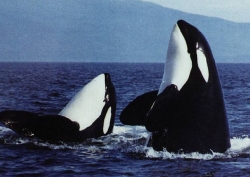 Males are longer and bulkier than females, average length 7.3m (24ft) as compared to females 20 1/4ft, males also have much taller and straighter dorsal fins.

Its common name, recognized by many people, is killer whale (originally called "whale killer" by Spanish whalers). Its scientific name is Orcinus Orca. The Romans called it "Orca," meaning "demon from hell".

Distribution
Killer whales inhabit all the oceans of the world. They are most numerous in the Arctic, the Antarctic, and areas of cold-water upwelling. Killer whale distribution is limited by seasonal pack ice.

Killer whales are found in both the open ocean and coastal waters.

Migration of fish and other prey accounts for movements of killer whales to and from certain areas.

Researchers have recently learned to recognize many individual killer whales from photographs, especially of their dorsal fins. Photo-identification promises to be an important new research tool for studying various aspects of cetacean biology, including movements, reproduction, behaviour, and population dynamics. Photo-identification has the potential to document the lives of individual whales in great detail. Researchers take photographs when the whale rises highest out of the water as it breathes normally and exposes the most markings on the back and dorsal fin. Studying the photos, these researchers must be skilled at recognizing subtle differences in whales' body appearance. The features they use for identification include dorsal fin shape and relative size, pigmentation patterns, scars, deformities, detail of tail fluke edges, encrustations, and blemishes. Researchers can identify individual killer whales by recognizing differences in the appearance of the dorsal fin and saddle.

Birth Seasons
Calves are born throughout the year. Gestation is about 17 months.

Frequency of Birth
Based on limited data collected from populations at sea, a female may bear a calf every five years.

Calving
Calves are born in the water. Deliveries can be either tail-first or headfirst. The umbilical cord snaps during or soon after delivery.

The light areas of some young killer whales may be creamy white to lemon yellow rather than white. This color usually turns white by the age of one year. In the first few days after birth, the dorsal fin and tail flukes gradually stiffen.

Nursing
The calf suckles from nipples concealed in abdominal mammary slits. Killer whale calves begin nursing several hours after birth. Calves nurse below water, close to the surface. The mother glides in a horizontal position with her tail arched, and the calf swims on its side with its mouth on the right or left mammary gland. Calves nurse for about 5 to 10 seconds at a time, several times an hour, 24 hours a day. The mother's milk is very rich so that the baby rapidly develops a thick, insulating layer of blubber. The fat content of the mother's milk increases as the calf develops. It ranges from about 28% to 48%. A calf may nurse for 12 months. A mother killer whale stays close to her calf and attentively directs its movements. The baby swims close to its mother and can be carried in the mother's "slip stream," a type of hydrodynamic wake, which develops as the mother swims. This helps the baby swim with less energy and enables the mother and calf to keep up with the pod. While most maternal behaviour is probably instinctive, first-time mothers are inexperienced at nursing their calves. The experience level of some first-time pregnant females is increased through training procedures that teach them to respond to nursing behaviour. To nurse, a calf swims on its side and suckles from nipples concealed in abdominal mammary slits.

Calf Development
Killer whale breeding colonies in marine zoological parks continue to provide a unique opportunity to observe and quantify aspects of their biology. A killer whale calf's upper teeth erupt at about two to four months. The lower teeth erupt at about three to five months. Calves begin to take a few fish at about three to four months. They eat solid food consistently at about four to five months. By the age of one year, calves can eat 50 to 60 lb. (23-27 kg) of herring, smelt, and squid every day. Calves grow about 2.6 ft. (80 cm) during their first year, and about 2.2 ft. (67 cm) during their second year. Calves can vocalize within days of birth, but sound production is shaped with age. In studies, scientists have determined the following. Vocal behaviour is not predetermined. Calves learn, during the course of development, which calls to make and under what circumstances. Calves are most likely to develop calls like those of their closest associates (usually the mother). Stereotyped calls develop between 5 months and 1 year of age.

Food Preferences and Resources
Killer whales are the top predators in the ocean. They are active predators. Opportunistic feeders, their diet varies from one region to another. In the Antarctic, killer whales eat about 67% fishes, 27% marine mammals, and 6% squids. Killer whales in the Bering Sea (near Alaska) eat about 65% fishes, 20% squids, and 15% marine mammals. Food preferences of resident and transient pods in the North Pacific differ. They eat a variety of fish, including salmon, cod, flatfish, hake, herring, and smelt. They also eat other marine mammals and seabirds. Killer whales prey on mysticete and odontocete whales, seals, sea lions, walruses, and occasionally sea otters and penguins.

Methods of Collecting Food
Much like packs of wolves or prides of lions, killer whales often hunt cooperatively in pods for food. They work together to encircle and herd prey into a small area before attacking.

Social Structure
Killer whales live in groups called pods. The size of a pod usually varies from less than 5 to about 30 individuals. A pod is a cohesive long-term social unit. A pod usually consists of males, females, and calves of varying ages. Several smaller pods may join occasionally to form larger groups of 50 or more individuals called herds or aggregations. There is an occasional exchange of members between pods, especially during breeding season.

Social Behaviour
Killer whales in a pod appear to establish strong social bonds. Behavioural studies suggest that certain animals prefer associating with one another. As with most species, there is a social hierarchy within a group of killer whales. This social hierarchy is female-dominant. The animals may rank themselves and establish dominance by slapping their tails against the water, head butting, jaw snapping, and various other vigorous postures and gestures. Killer whales often hunt together.

Individual Behaviour
Killer whale behaviour includes spy hopping (hanging vertically in the water with the head partially above water), breaching (jumping clear of the water and landing on the back or side), lob tailing (slapping the tail flukes on the surface of the water), and pec slapping (slapping a pectoral

Stranding
Killer whales have been known to mass strand. As with other whales, the reason for these strandings is unknown. Stranding is not the same as intentional beaching for pursuing prey.

Interaction With Other Species
Other marine mammals, such as minke whales, Dall's porpoises, and seals, have been observed swimming with killer whales, but they may be prey of killer whales at other times.

Hearing
Killer whales have a well-developed, acute sense of hearing. The auditory cortex of the brain is highly developed. Killer whales have responded to tones within the frequency range of about 0.5 to 100 kHz. (The average hearing range for humans is about 0.02 to 17 kHz.). Peak sensitivity is about 15 kHz.

Sound Reception
Most sound reception, or hearing, probably takes place through the lower jaw. A killer whale may also receive sound through soft tissue and bone surrounding the ear. The fat filled lower jawbone conducts sound waves through the jaw to bones in the middle ears. The fat-filled lower jawbone appears to conduct sound waves through the jaw to bones in the middle ears. The lower jawbone of toothed whales broadens and is hollow at the base, where it hinges with the skull. Within this very thin, hollow bone is a fat deposit that extends back toward the auditory bulla (ear bone complex). Sounds are received and conducted through the lower jaw to the middle ear, and then to hearing centers in the brain via the auditory nerve. A killer whale does have small external ear openings, a few inches behind each eye. Each opening leads to a reduced ear canal and an eardrum. Some scientists believe that killer whales receive sound through these openings. Other scientists believe that a killer whale's external ear openings are nonfunctional. Foam surrounds the ear bone on all sides. This foam contains air. Air stops sound waves traveling through water and living tissues. Many scientists believe that this foam acoustically isolates the ears; enabling a killer whale to tell which direction a sound comes from.

Eyesight
Killer whales have acute vision both in and out of the water. The eyes, about the same size as the eyes of a cow, are on each side of the head, just behind and above the mouth. Glands at the inner corners of the eye sockets secrete oily, jellylike mucus that lubricates the eyes, washes away debris, and probably helps streamline the eyes as a killer whale swims. This tear like film may also protect the eyes from infective organisms.

Tactile
Features of the brain indicate that a killer whale's sense of touch is well developed. Killer whales' skin is sensitive to touch.

Taste
Little is known about a killer whale's sense of taste. They do have taste buds, although they haven't been well studied.

Smell
Olfactory lobes of the brain and olfactory nerves are absent in all toothed whales, indicating that they have no sense of smell.